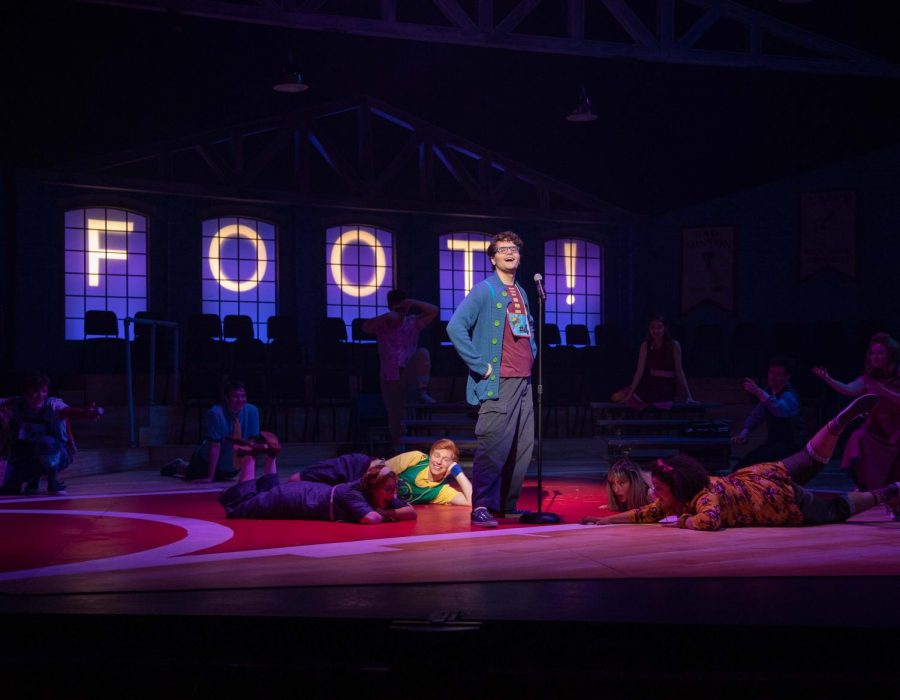 Set in a middle school gymnasium in a geographically ambiguous location, the show begins with the character of Rona Lisa Peretti, played by Erika Bailey, entering the auditorium carrying the trophy. She has a flashback to when she correctly spelled the word “syzygy” and won the third annual Putnam County spelling bee. It becomes clear that Peretti still very much lives in the glory of her own spelling bee days.

Soon after, the colorfully clad spelling bee contestants, six neurotic, competitive and language-loving middle schoolers, are introduced one by one: Chip Tolentino, Logainne Schwartzandgrubenierre, Leaf Coneybear, William Barfee, Marcy Park and Olive Ostrovsky. They join together to sing the title song, “The 25th Annual Putnam County Spelling Bee” with great excitement for what is to come.

In addition to the six main student participants, four random audience members were chosen to also participate in the bee, which made for a different experience at each showing. They spelled their way through the production, hoping not to hear the notorious ding of the bell that would send them home with a juice box.

Each of the six main characters were equipped with dynamic and eccentric personalities. Each one was given a moment in the spotlight with a monologue-like personal song, which contributed to the audience’s understanding of their individual personalities.

Each story surrounding a character offered significant psychological and emotional complexity. This was an aspect of the show I was definitely not expecting, since it is a comedy musical.

The characters possessed a great deal of depth, and that was a definite strength of the show. Another very positive aspect was that no one character pulled all of the weight — it was a job equally done by the entire cast.

The character of Vice Principal Douglas Panch, played by freshman Sam Sweere, served as the word pronouncer for the spelling bee. When a spelling bee participant would ask for a definition or a sentence to elaborate on the given word, his answers were often ridiculous and completely unhelpful to the participant.

Sweere masterfully delivered his dialogue in a deadpanned, monotonous way that was awarded uproaring laughter from the crowd each and every time. His performance was definitely one of the most memorable.

Barfee was a part of a heartwarming subplot in which he becomes close friends with the character of Olive Ostrovsky, played be Zoe Sneed. The character of Ostrovsky does not have present parents or a supportive family life. Ostrovsky expresses how much this friendship means to her toward the end of the play, and due to her wonderful acting, it is a very beautiful moment.

The character of Logainne Schwartzandgrubenierre, played by Kennedy Keil, was another one of the most memorable performances. She is a politically outspoken, purple pantsuit-wearing firecracker. She is high strung, stressed out and supported by her two dads. She’s loud, assertive and perfectionistic. Keil was fabulous as Schwartzandgrubenierre.

Chip Tolentino, played by Jake Senne, has an unfortunate experience involving sexual arousal after seeing another contestant’s sister, who was a random audience member with the spotlight on her. This incident forces him to lose the competition. Following this, he reluctantly takes his juice box, and reenters later selling concession stand items and sings the song “Chip’s Lament.”

Really, all of the performances were memorable. Calli McCartan was great as Marcy Park, an uptight, religious overachiever who makes the sign of the cross after every turn and finally lets her hair down after accepting a loss.

Thayne Lamb as Leaf Coneybear, a kid with no attention span who has to stare at a fidget spinner in order to get in the zone enough to spell a word, was also very well-cast.

Overall, the 25th Annual Putnam County Spelling Bee was delightful. With its short running time of 90 minutes, excellent cast of dynamic characters and a plentiful supply of laughs, it was one of the best Sunday afternoons I have spent in a long time. If you run across another production of this musical, I would highly recommend seeing it.