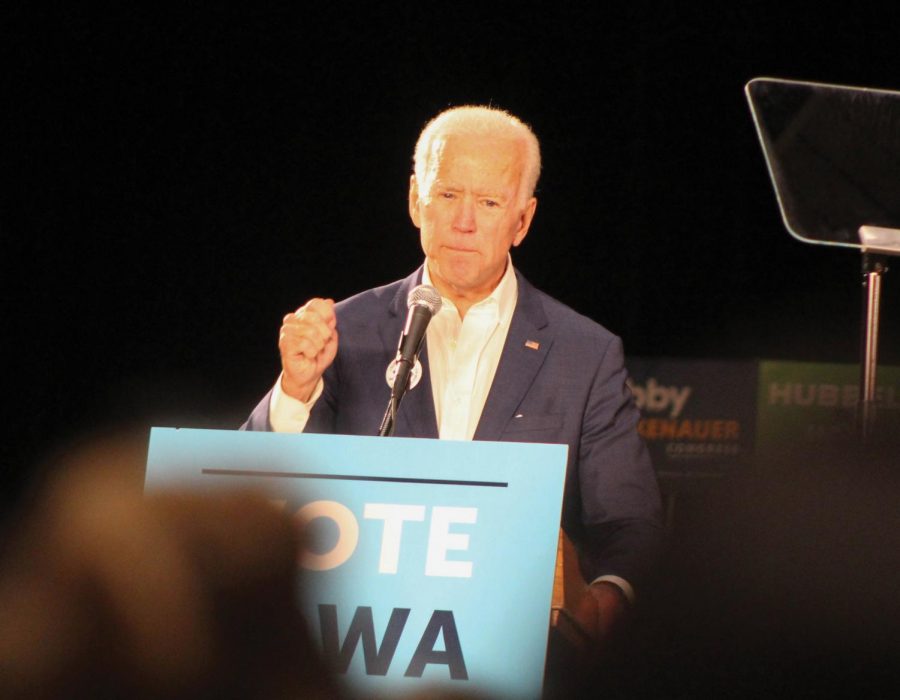 Biden, who served as the 47th Vice President of the United States under President Barack Obama, had also served as a U.S. senator from Delaware from 1973 until 2009. As part of his appearance, he helped rally support for the Iowa gubernatorial election and first congressional district race.

“I feel like the country’s at a tipping point,” said Greg Kanz, a Cedar Rapids father of two who attended the rally. “We’re either going to go one way or the other, and it’s a crucial time to make a decision.”

Barb Taber, another woman from Cedar Rapids who came to the event, expressed her excitement ahead of next week’s vote.

“I’m very excited about it,” she said. “Everybody has to get out and vote. It’s very important.”

First to the podium was Troy Price, the chair of the Iowa Democratic Party. He began the night by welcoming the crowd, including a few notable guests: former first lady of Iowa Christie Vilsack and Tim Gannon, the Democratic nominee for Iowa secretary of agriculture.

Price was followed by Tucker Cassidy, a man with a quadriplegic disability who was shot in 1994 and has been featured in recent television ads in support of health care. Cassidy is also the nephew of Lieutenant Gubernatorial candidate Rita Hart. He talked about how the privatization of Medicaid had affected him and his disability, while emphasizing the importance of all Iowans getting out to vote.

“In one week, Iowa will make a decision,” Hart said in her opening statement. “That decision will be a decision of change.”

Hart, who graduated from UNI with a bachelor’s degree in education, was elected to represent Clinton and Scott counties in the Iowa Senate in 2012 and was re-elected again in 2014.

“If we do our job and work hard, we will be able to forge a movement that will move this state forward,” she explained.

Gubernatorial candidate Fred Hubbell followed his running mate, stating “I’m running for governor of our state to put people first. We need change.” Hubbell, a fifth-generation Iowan, then recalled one of the most difficult moments of his life, when he and his wife Charlotte were taken hostage in 1981 during an airplane hijacking on a Pakistan International Airlines flight. Hubbell explained how the experience made him want to give back to the public.

The 67-year old businessman spent his time discussing a number of issues, including education and wages. “One of our highest priorities is to invest in our public education system,” Hubbell explained. “We need to create good paying jobs for our hardworking men and women.”

“2018 is coming down to our values and who we are,” she said. “We as Iowans step up for each other every single time.”

The night concluded with the former Vice President wrapping the evening. Biden began his speech by discussing the recent shooting at a synagogue in Pittsburgh, stating that “words matter.” Biden also took a brief moment to thank the people of Iowa for their support in 2015 during the death of his son Beau, who lost his battle to brain cancer.

The longtime former senator went on to praise Hubbell and Finkenauer, saying that Iowa needs leadership like they possess.

“You all know her story,” he said about Finkenauer. “It’s the Iowa story. She’s tough. We need more men and women of character like Fred and Abby.”

Jared Girres, a senior political science and criminology double major at UNI who attended the rally, enjoyed what he heard from Biden, Hubbell, Hart and Finkenauer.

“To me personally, these elections are quite important for people who are frustrated with the current political climate and the way things are going,” Girres explained. “Everyone in the house is up, a third of the senate, a lot of governors seats. Voting is the only way you’re going to see change.”

Polls on election day in Iowa will open at 7 a.m. and will close at 9 p.m., with results to follow.