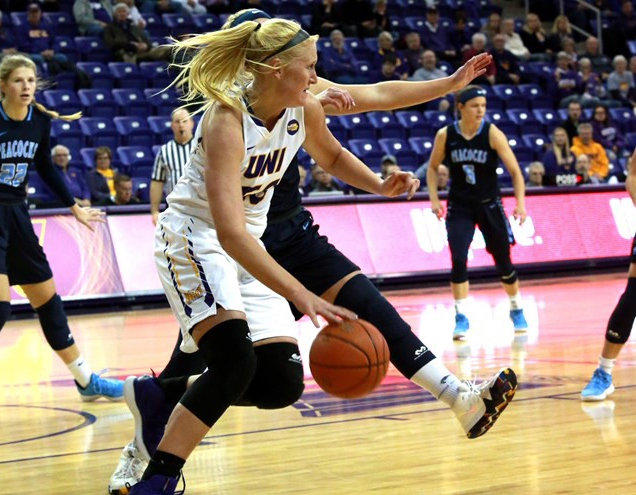 After making three consecutive appearances in the conference tournament championship game, UNI will kick off their 2018-2019 regular season on Nov. 9 when they host the University of Delaware in the Preseason WNIT Tournament.

Fans of the UNI women’s basketball team got their first chance to see the Panthers take the court as head coach Tanya Warren’s team faced off against the Upper Iowa Peacocks in an exhibition match up.

Four Panthers scored double-digit points as UNI rolled to an 89-41 win over the Peacocks in their lone tune-up game prior to their regular season opener.

UNI shot 37.2 percent from the field and 37 percent from beyond the arc as they held Upper Iowa to less than 10 percent from three-point shooting. The Panthers also tallied 14 steals and forced 26 turnovers in the win.

The Panthers now turn their attention to the Delaware Blue Hens for their Friday, Nov. 9 season opener at the McLeod Center.

“Delaware is a very, very good team with almost everyone back,” said Coach Warren in her Nov. 5 press conference. “They are extremely athletic in the post. It’s really hard to double their post because of their ability to shoot the basketball on the perimeter. It’s going to be a great challenge for us.”

Tip-off between the Panthers and Blue Hens is set for 8:30 p.m. and can also be watched on ESPN3.