Queen biopic is an entertaining mess 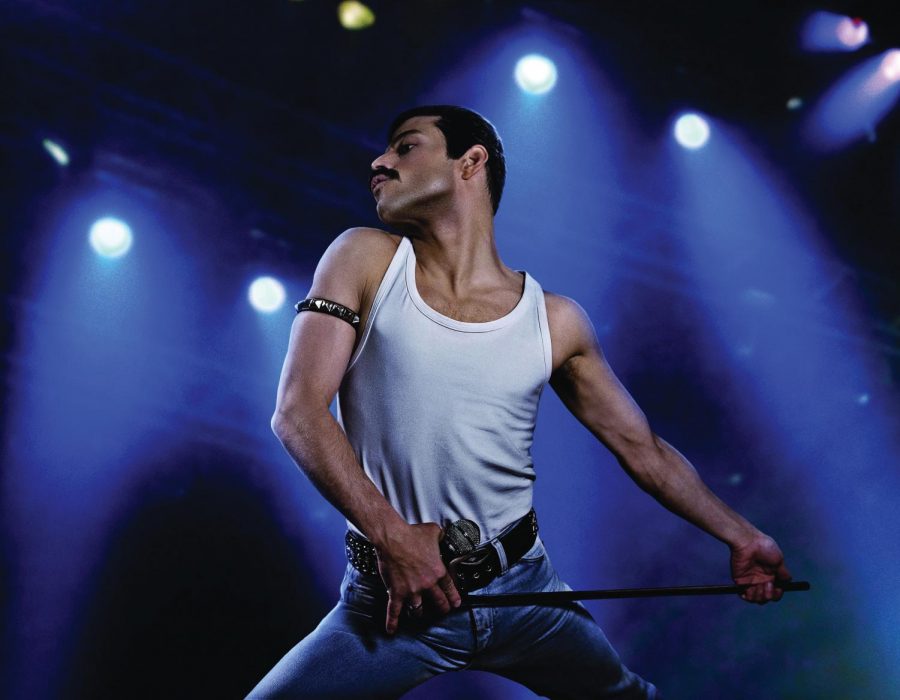 Directed by Bryan Singer and starring Rami Male,, "Bohemian Rhapsody" follows the journey of the band Queen and its lead singer, Freddie Mercury.

Making a biopic about Freddie Mercury and Queen is a truly difficult task for anyone to accomplish. Condensing the life of this legendary lead singer into a feature-length film is next to impossible.

Bryan Singer attempts this feat with “Bohemian Rhapsody,” which unsurprisingly isn’t able to do justice to its subject matter. Still, the film makes up for what it lacks with great musical numbers and a mesmerizing performance by Rami Malek as Freddie.

Singer has never worked well with emotions throughout his career and that clearly shows here. He struggles to deal with the more human scenes and Mercury’s many difficult relationships with his closest friends and family. Most scenes feel hokey as they try every shameless tactic to get the audience to care.

The film also uses a straightforward method of telling the story. The plot basically boils down to a glorified Wikipedia page that tracks the history of the band from start to finish. By the end, everything viewers have learned feels like surface details that could easily have been expanded more.

Singer may not be an emotional filmmaker, but what he does have going for him is his ability to be a showman. The many different concert scenes are a treat to watch as they play back some of the band’s greatest hits. Eventually, it all culminates to the famous “Live Aid” performance that blows away all expectations. The film recreates the historic moment beat-for-beat and makes viewers feel like part of the electric crowd.

Penned by Anthony McCarten, the script for “Bohemian” fails at various points.

The most apparent problem is the truly atrocious dialogue ruining many moments that are supposed to be heartfelt. Any scene with Mary and Freddie immediately becomes a sappy mess and dashes away any hope of connection to the characters and their relationship.

It can also be said that the script fails to defend the film’s 134-minute runtime. It never dives deep enough into Mercury’s troubled life. Background details are given about his upbringing and his strained relationship with his parents; however, these elements are treated with minor importance and don’t make an impact on Freddie as a character.

On a brief note, there is a small subplot with Mike Myers making a cameo as a record producer who objects to the band’s unconventional ways. Myers comes off as a cartoon and the whole storyline reeked of desperation to get a slight laugh out of the meta-joke.

Lastly, Freddie’s sexuality is only briefly addressed and with very little detail. It never truly feels that important even though it became a defining part of his image by the end of his career. The script never dives into Freddie’s sexuality, just states the fact that he is bisexual. His sexuality becomes the main storyline by the end of the film, but by then, it’s too little too late.

Freddie Mercury always seemed like the type of person who would be impossible to properly portray on screen. Rami Malek defies that logic and delivers a pitch-perfect performance. Apart from the singing voice, Malek recreates the mannerisms and overall presence of Mercury down to the letter. He brings a kind of contagious energy that lights up the screen every time he grabs the mic, giving us the sense of what it might have been like to be in front of Mercury as he performed.

The rest of the cast does an all right job, but really, none of them matter compared to Malek.

Lucy Boynton is pretty good as Mary Austin, Freddie’s wife at one point and lifelong friend. Boynton does what she can with the terrible dialogue and tries to salvage each scene she shares with Malek.

Gwilym Lee, Ben Hardy and Joseph Mazzello play the rest of the band. Each of them is average and just kind of float around in the background as Freddie takes center stage.

“Bohemian Rhapsody” isn’t a good film when put together. It fails to be a serviceable biopic about the band and its larger-than-life lead singer. However, the film is still a very fun time that delivers when it comes to musical thrills and will have you headbanging and listening to Queen for weeks after.