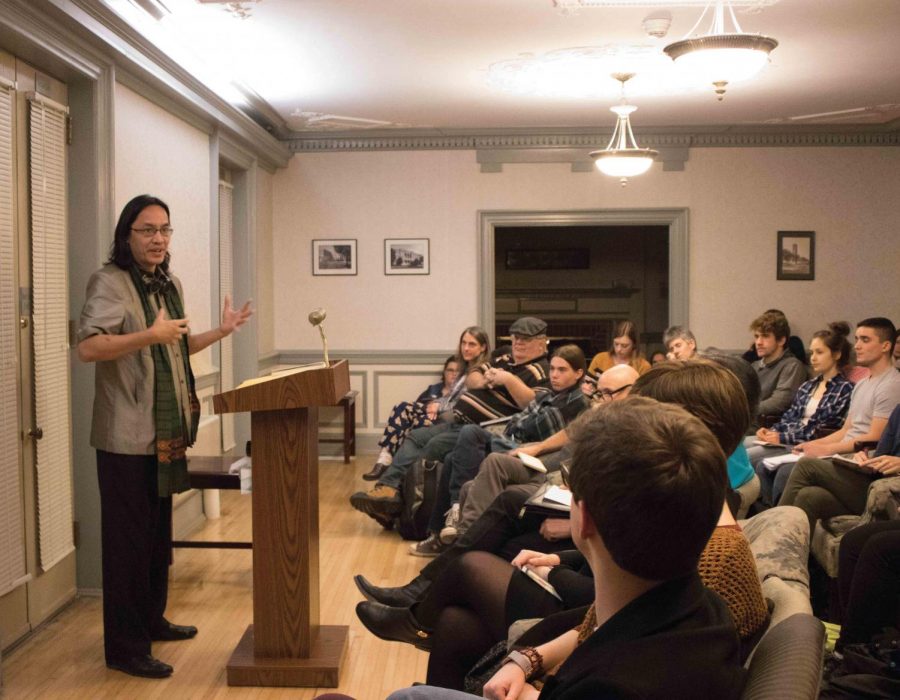 Imagine a world filled with vampires, cyborgs and pufferfish mermaids. While worlds like these are normally stored away in the depths of our imaginations, sometimes all it takes is the spoken word to bring them to life.

On Nov. 12 at 7:30 p.m., members of the Science Fiction and Fantasy Poetry Association shared their stories with an audience in Bartlett Hall.

To start the event off, English professor Vince Gotera informed the audience that November had been declared as Speculative Poetry Month.

When describing speculative poetry, Gotera stated that it’s not too far from other forms of poetry with which people may be familiar.

“The difference has to do with topic,” Gotera said. “Speculative poetry incorporates magic, science or the supernatural. Actually, though, speculative poetry has been written as long as poetry has existed. For example, the medieval poem ‘Beowulf’ that you might have read in high school portrays encounters with monsters and dragons. When people think of ‘Literature’ with a big L, lots of that poetry includes speculative elements. So speculative poetry is not that different from regular poetry; it’s all poetry.”

Once Gotera had finished introducing the genre, several guest readers shared their tales of mystery, technology and horror.

The featured reader of the night was Bryan Thao Worra, a Lao-American poet and president of the Science Fiction and Fantasy Poetry Association. Wearing steampunk goggles around his neck and a green scarf, Thao Worra approached the podium in order to read his poems and explain what poetry meant to him.

“Poetry, for me, isn’t just a question of words on a page,” Thao Worra said. “Poetry is a question of souls talking to souls. That’s when your poetry will gain the most power. How do we confront the chaos and uncertainty of the world and not be paralyzed by it? We have to show people how to take a step towards it.”

Despite the focus on the spooky and otherworldly, Thao Worra wished for everyone to know that speculative poetry isn’t removed from our everyday experiences. He cited “Dante’s Inferno” as an example. In that poem, corrupt officials in the author’s own life were given their just rewards in hell.

“Part of my work is to challenge what is foreign and what remains foreign,” Thao Worra said.

While his poetry mentioned various events from his childhood and wars, he also speculated about what a Lao-American future might look like. As he moved from poem to poem, Thao Worra mentioned a zombie Buddha, Lao artificial intelligence running cities and “Laostraunauts.”

Thao Worra believes that poems should be able to survive in multiple formats. He sees written poetry as a guideline which can be adjusted during spoken word performances as needed. This flexibility can also be carried over into the creation of the poetry itself. One of the newer styles of poetry is graphic poetics, in which artists incorporate images into their poems. According to Thao Worra, virtual reality may soon be used to enhance the meaning of a poem through technology.

Bringing the event to a close, Thao Worra wanted the poets in the room to reflect on their poetry careers.