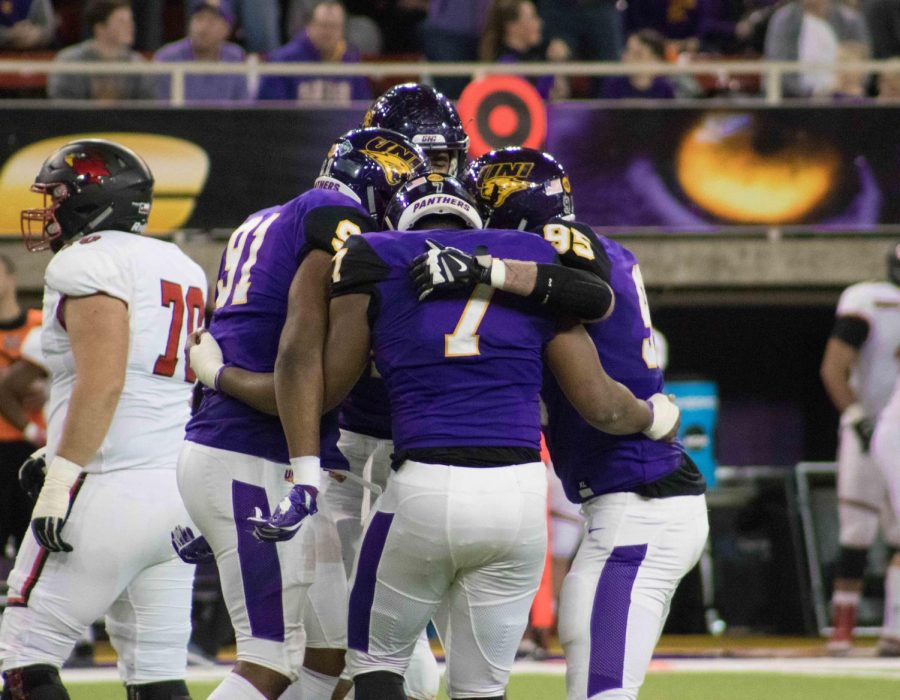 The Panthers will take on UC-Davis this Saturday in the second round of the FCS National Football Playoffs.

The Panthers wish of a Football Championship Subdivision (FCS) postseason berth was granted after UNI completed their 2018 regular season with a 37-0 home win over the Missouri State Bears on Saturday, Nov. 17.

Despite having five losses during the year, the FCS playoff selection committee gave the Panthers the nod into the 24-team field based on UNI’s strength of schedule, which is among the toughest in the nation, and the Panther’s three wins against ranked opponents.

At the selection show on Nov. 18, UNI found out their first opponent would be the Lamar Cardinals (7-4) out of the Southland Conference. This was the second time these two teams met on the gridiron, with the Panthers defeating Lamar in 1964 during the Pecan Bowl, 19-17.

Things didn’t start well for the Panthers. On the second play from scrimmage, Lamar wide receiver Kirkland Banks went 73 yards to the end zone on a catch and run pass from quarterback Darrel Colbert. The Cardinals fumbled the snap on the extra point, resulting in a failed attempt to convert.

UNI responded with a 21-yard field goal from Austin Errthum two minutes later to pull within three points, trailing 6-3. Lamar, known for their aggressive run attack, also stunned the Panthers with highly mobile quarterback play from Colbert, who had the ability to make a play out of next to nothing. Colbert’s mobility helped him find tight end Case Robinson for a 25-yard touchdown pass to go up 13-3.

Errthum split the uprights midway through the second quarter with a 44-yard field goal to pull within seven points, 13-6. After Lamar punted on the following possession, quarterback Eli Dunne found wide receiver Jalen Rima for a 32-yard touchdown. Errthum’s extra point was good and the Panthers tied the game at 13 with just under two minutes to go in the first half of the game.

The Panthers were able to prevent the Cardinals from adding any additional points to the scoreboard, when Isaiah Nimmers intercepted Colbert in the waning seconds of the first half.

The third quarter of play saw little action from either side. Lamar fumbled early in the period, where UNI was able to recover, but couldn’t capitalize on the possession. Minutes later, a pass by Dunne was tipped for an interception, which led to a missed Cardinal field goal from 32-yards, wide to the right.

With the ball and momentum starting to shift their way, Errthum drilled a 35-yard field goal to give the Panthers their first lead of the game with two minutes to go in the third quarter.

In the fourth, Lamar fumbled the ball inside the UNI 20-yard line for the second time in the game. UNI was forced to punt the ball away after failing to convert after the turnover. This set up a 36-yard field goal attempt for Lamar kicker Elvin Martinez.

With the chance to tie the game with under three minutes to play, Martinez missed his second straight field goal of the game to preserve the Panther lead. UNI would keep the ball on the ground for much of the remainder of the game and prevented a miracle play in the final seconds to hold on for the 16-13 win to advance to the second round of the FCS playoffs.

“We stuck to the plan and played good football,”said head coach Mark Farley. “These guys played their tails off. They earned this win.”

Next, the Panthers (7-5) will head out west to California to take on the University of California, Davis Aggies (9-2) out of the Big Sky Conference on Saturday, Dec. 1, at 6 p.m.