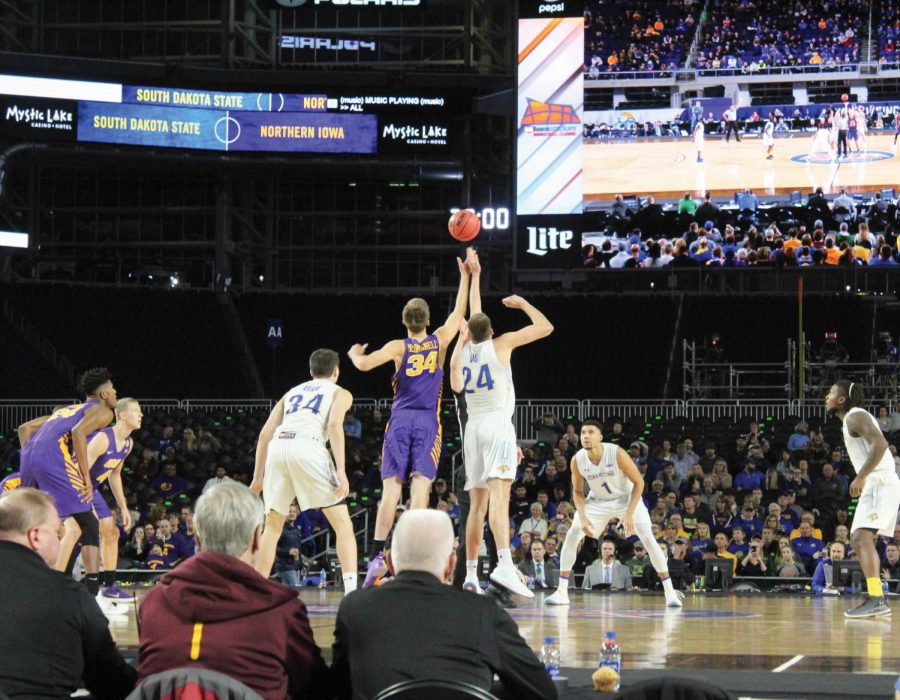 UNI (3-6) committed 15 turnovers and allowed their opponent to score 38 in their 82-50 loss to South Dakota State at U.S. Bank Stadium in Minneapolis on Saturday night.

Outside of the home of the Minnesota Vikings, the snow fell and the wind was ever present. Inside the stadium, which played host to Super Bowl LII last February and is due to welcome the 2019 NCAA Final Four, the atmosphere was electric.

Hosting its first ever basketball event, U.S. Bank Stadium in Minneapolis invited eight college teams to the Twin Cities over the weekend as a test run event ahead of April’s national semi-final and championship games. It just so happens that the UNI Panthers were invited to partake in the action as they were slated to play the South Dakota State Jackrabbits, a team that has seen itself in the NCAA tournament the last three seasons as the Summit League tournament champions.

The Panthers entered the game at the high-profile venue having struggled recently. After finishing in fourth place at the Paradise Jam tournament in the Virgin Islands, UNI dropped back-to-back games at Old Dominion and Utah State. Having not played a home game in Cedar Falls since Nov. 6, the Panthers were eager to play one final game before returning to the friendly confines of the McLeod Center.

Things didn’t not start well for UNI. The Panthers struggled to contain Jackrabbits senior forward Mike Daum, who dominated play off the glass and in the paint. Turnovers were also a big concern for UNI, allowing eight balls to be lost on offense in the first half alone.

For much of the first twenty minutes of play, the only Panther who seemed to be able to produce any offense was sophomore guard Trae Berhow, a Minnesota native who shot eight-for-12 from the field in the first half, including three baskets from beyond the three-point line.

“He played well,” said UNI head coach Ben Jacobsen. “Anytime you play near your hometown, you have a game like that.”

By halftime, the numbers didn’t look good. UNI took a total of 49 shots from the field converting on only 14 for a shooting percentage of 28.6. They went into the locker room trailing 40-25 at halftime.

The second half saw the Jackrabbits exhibit more of the same offensive efficiency they displayed in the first. Daum continued his tear across the court en route to a double-double of 24 points, 11 rebounds and one assist. The Panthers also continued to struggle, allowing points off of their turnovers, letting their 15 total turnovers in the game lead to the Jackrabbits scoring 38 points in response.

In a night where things just couldn’t seem to get going offensively for UNI, South Dakota State thrived as the Jackrabbits cruised to an 82-50 win. The Panthers now fall to 3-5 on the season.

“Where it’s been difficult has been the practice time,” Coach Jacobsen explained in his postgame press conference. “We knew we’d be playing good teams on neutral courts. Tonight, we let ourselves get behind the ‘eight-ball.’”

The Panthers will return home on Saturday, Dec. 8, to face the University of Dubuque Spartans for their first home game in over a month. UNI will also take on Iowa, Grand Canyon University, North Dakota and Stony Brook over the holiday break to close out non-conference play before opening up Missouri Valley Conference play on Jan. 2 at Bradley.