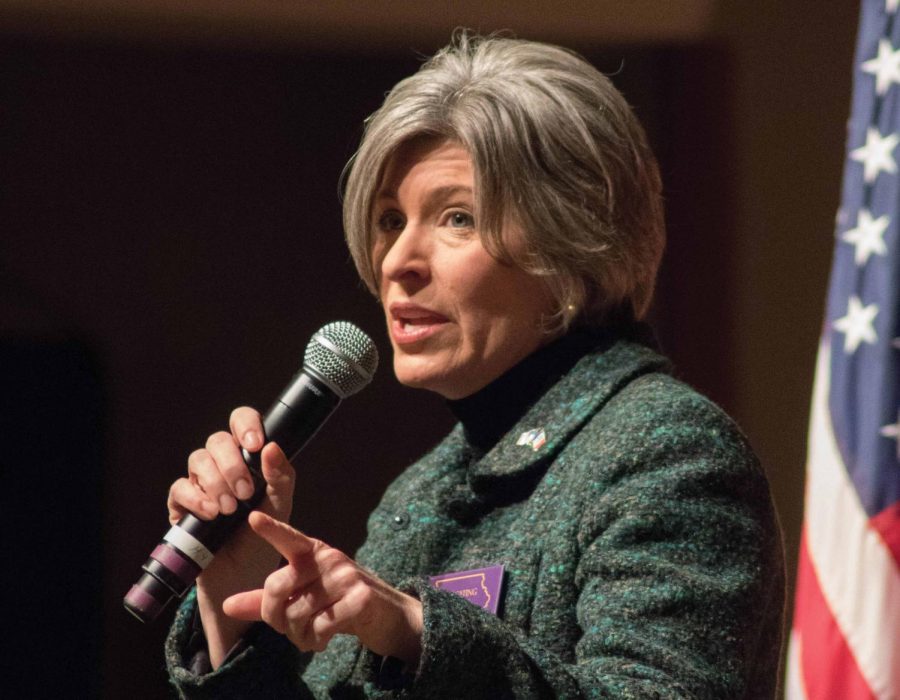 On the snowy Wednesday morning of Jan. 23, Senator Joni Ernst (R) arrived at the University of Northern Iowa for a town hall as part of her 99-county tour.

Ernst, who is up for re-election in 2020, was the first woman to be elected to the Senate from Iowa when she won in 2014.

Around 30 people gathered in the Lang Hall Auditorium for the 8 a.m. meeting. After a brief introduction from the Cedar Falls Mayor, Jim Brown, Ernst immediately began to field questions from the audience.

Although the issues raised included cyber security, veterans and climate change, the highlight of the town hall discourse was the government shutdown, now in its fifth week.

Many community members expressed frustration with Congress for failing to pass any compromise. Citing the 800,000 government employees being directly affected by the shutdown, many asked why senators like Ernst were not doing more to help the “hostages”.

Senator Ernst replied to their concerns by insisting that she would support any proposal that would lead to the end of this shutdown.

Addressing many questions regarding the shutdown, Ernst referred back to the Senate vote scheduled for Thursday, Jan. 24.

“I’m here to respond to that and take your concerns back to Washington, D.C,” said Ernst, “If it does fail tomorrow, we’ll have to go back to the drawing board.”

A sister topic to the government shutdown was the concern over border security.

In response to the push-back against border wall funding, Ernst reminded everyone that the previous four administrations supported physical barriers at the southern border.

Naming the past four presidents, Ernst said, “All used authorized funding to build fencing and border wall protections. Four administrations. Now, all of a sudden, it is immoral to put up a barrier. Where has the outcry been in the last couple of decades?”

Ernst fielded several other questions relating to her support for Brett Kavanaugh’s supreme court nomination, Deferred Action for Childhood Arrivals (DACA), transgender discrimination and her personal salary during the shutdown.

Responding to roughly 15 questions from the audience, Ernst concluded the town hall after about one hour. Noting that she would be flying back to D.C. that evening in order to vote the following day, she ensured the audience that she would vote to open up the government.

Northern Iowa Student Government (NISG) executives attended the event and met with the senator beforehand. In the meeting with Ernst was Student Body President and Vice President Drew Stensland and Kristen Ahart, respectively, and Director of Governmental Relations, Matthew Johnson.

According to Ahart, when meeting with Ernst, they discussed issues regarding rural Iowa development and student concerns over Title IX.

Ahart said she was pleased with the town hall and happy to see student support.

According to Ernst’s office, her next two stops before heading to D.C. will be in Hardin and Boone counties.