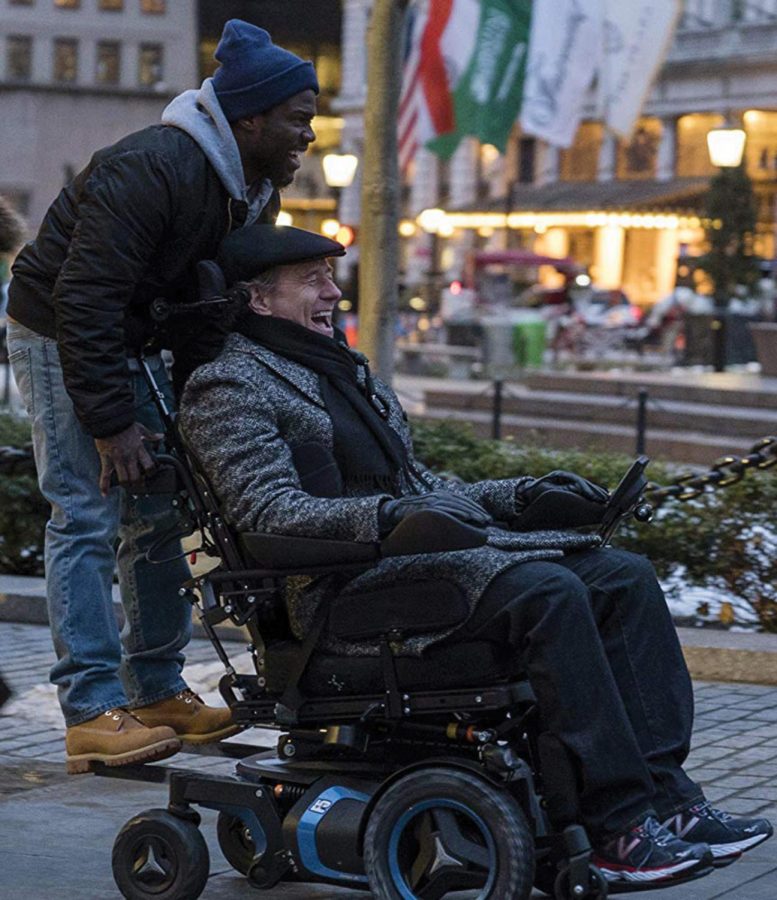 Kevin Hart and Bryan Cranston star in "The Upside," a remake of the 2011 French film "The Intouchables." The film received a 39 percent rating on Rotten Tomatoes.

January is usually the time of year when the film industry releases movies they’ve lost confidence in. Most of these films come and go without anyone even noticing they exist. One of the biggest films this January is “The Upside,” which tells the unlikely true story of a wealthy quadriplegic hiring an ex-con as his caregiver. Starring Bryan Cranston and Kevin Hart, this film isn’t as bad as its release date would suggest, but it also isn’t anything special enough to justify your attention or hard-earned money.

Directed by Hollywood workman Neil Burger, “The Upside” is both structured and shot in the typical fashion one would expect from studio comedies. Everything feels like it has been assembled from a template, done dozens of times before by more competent directors.

Burger middlingly works with the more emotional aspects of the film — any moment of dramatic tension can be seen coming from miles away and follows the usual cues of the genre. Even the tonal shifts become quite predictable and create an endless cycle of half-hearted storytelling.

While it may have been unintentional, the one thing Burger does well is letting the actors do what they do best. Hart and Cranston take over every scene they appear together in and use their chemistry to distract from many of the film’s faults.

Given that this is a remake of the 2011 French film “The Intouchables,” the story closely follows its source material.

The biggest thing the script lacks compared to its predecessor is a sense of emotional weight between the main characters. This problem mainly stems from a thin plot with lofty intentions that only offer tepid results. The writers try to tackle the racial and classist divide between the main characters but end up putting in so little effort that it feels like a disjointed waste of time. Insightful commentary is tossed aside for one-liners and sly remarks that end up feeling overly safe and tedious.

Despite being over two hours long, the film continually runs into the problem of having too little to work with. This is especially true regarding the two weak subplots: one with Hart trying to reconnect with his son and the other with Cranston battling his limitations to find love. Both side stories feel empty and give each actor little to work with. This results in a muddied overall narrative that tears itself down rather than building up towards something.

Probably the biggest saving grace for the film (and the only reason anyone would watch it) is the performances from the two leading actors.

Hart does what he does best as Dell and shows that he is still a master of comedy, whether it be physical or through his fast-paced banter. Even though the script is mostly to blame, Hart does struggle with the dramatic parts that require him to slow down and break away from his usual tricks.

Acting as the dry humor to Hart’s energy is Cranston as the extremely wealthy and depressed quadriplegic, Phillip. While he does serve up some funny remarks from time to time, Cranston more or less just goes through the motions as though he knows he is above a project of this quality.

Lastly, Nicole Kidman intermittently shows up as Phillip’s executive assistant, Yvonne. To see Kidman in this film feels completely out of place — her skills go unused on a character whose only purpose is to be a disapproving foil to Hart’s shenanigans.

Except for Kevin Hart or Bryan Cranston, there really isn’t much in this film to make things interesting. There are some comedic elements that incite some chuckles, but more often than not, a feeling of emptiness will lay dormant in your head. Best described as a filler movie to waste some time, “The Upside” is something you’ll watch and most likely forget about within 24 hours.